Dear Friends of the POLIN Museum,
This newsletter includes:

Mike Pence (vice president of the United States) and Benjamin Netanyahu, Israeli PM, held talks in the POLIN Museum of the History of Polish Jews.

“May the spirit and heroism of the Warsaw Ghetto Jewish resistance fighters who staged the first organized uprising against Nazi occupation in all of occupied Europe be an eternal reminder of the dangers of powerlessness in the face of tyranny.”

Pence and Netanyahu were in Warsaw attending a conference on the Middle East which was co-hosted by the U.S. and Poland.

Dariusz Stola, Head of the POLIN Museum, in the midst of a political storm

Professor Dariusz Stola’s term as director of POLIN Museum was due to expire at the end of February 2019. The Ministry of Culture decided against the automatic renewal of his contract. The position will soon be open, and Prof. Stola will re-apply for it. Zygmunt Stępiński, the current Deputy Director of the museum, will act as interim director.

“In 2018 alone, POLIN Museum of the History of Polish Jews was visited by over 670,000 people, the majority of them being guests from abroad. In Warsaw, such large attendance may be compared only with the National Museum and the Warsaw Rising Museum. The temporary exhibition – Estranged: March ’68 and Its Aftermath, proved to be extremely popular—it was viewed by over 116,000 people, a record-breaking number for an exposition dedicated to history” [in a Polish Museum] – the exhibition was sponsored by the AEMJP.

“Prof. Stola has come under fierce attack from the politicians and media associated with the current government. First, he criticised the Amendment to the Institute of National Remembrance Act. He then launched the program titled “Estranged. March ’68 and Its Aftermath” dedicated to the 1968 antisemitic campaign in Poland, which also pointed out the contemporary hate speech (the exhibition presented examples of online hate speech propagated by journalists). Prof. Stola was accused, among others by MPs from the ruling Law and Justice (PiS) party, of slandering Poland. In one interview, Minister of Culture Piotr Gliński accused him of a “deep political involvement.”

Read more (in English)…. (the original version of this text comes from Gazeta Wyborcza)

On 18 January 2019, an agreement of cooperation was signed by the Memorial de la Shoah (Paris) at the Emanuel Ringelblum Jewish Historical Institute (Warsaw).

The agreement was signed in presence of Ms. Paulina Florjanowicz, Director of the Cultural Heritage Department at the Ministry of Culture and National Heritage, Mr Jacek Chodorowicz, Representative of the Minister of Foreign Affairs for Contact with the Jewish Diaspora, Mr Pierre Levi, Ambassador of France, Piotr Wiślicki – Director of the Jewish Historical Institute Association in Poland, and representatives of Memorial de la Shoah, including director Jacques Fredj.

Heads of both institutions, Jacques Fredj and prof. Paweł Śpiewak, have emphasised the importance of cooperation in the area of exchange of experiences, sharing archive resources and education. Both have also stressed that cooperation is especially important in the face of new challenges posed by the reality of increasing antisemitic attitudes throughout Europe.

Thank you for your presence !

We were delighted to screen, for the first time in London, the para-documentary movie by Roberta Grossman about the Oneg Shabbos Archives collected in Warsaw under the supervision of Emmanuel Ringelblum (1900-1944) titled Who Will Write Our History? The movie was prepared with the experts from the POLIN Museum and is narrated by Adrien Brody (Academy Award / Oscar winner for The Pianist in 2003).

The screening was a part of the project: Global Screening Event on International Holocaust Remembrance Day, January 27. The film was shown simultaneously in hundreds of locations all around the world, with the anchor screening in Paris, at UNESCO headquarters.

We are grateful to our partner, JW3, The New Postcode for Jewish Life and the UK Jewish Film for their generosity and model cooperation.

A few pictures of the event: aemjp.eu
About the movie: whowillwriteourhistory.com

The most important film on the subject since Claude Lanzmann’s “Shoah.”
Nothing short of a masterpiece.
— Robert Albanese, Vancouver Jewish Film Festival

Till July 1, 2019, the exhibition “In King Matt’s Poland: The 100th Anniversary of Regaining Independence” welcomes both adults and children.

Inspired by a children’s novel by Polish-Jewish author and pedagogue Janusz Korczak, the exhibition tells the story of a young king’s adventures is a pretext to describe social reforms, and is a veiled allegory of Polish history. 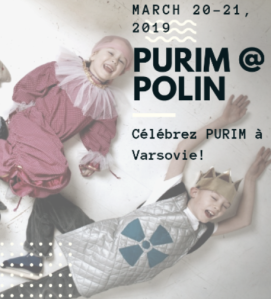 Among many activities devoted to Purim celebrations, POLIN will organise a family workshop on March 24 – a journey in time with old songs and games stemming from Polish-Jewish folklore.

On April 8, visitors will be able to learn more about Pesach cooking in King Matt’s Poland.

April 19: The daffodils campaign. Over one thousand volunteers will hand out paper daffodils – a symbol of remembrance of the Warsaw Ghetto Uprising – in the streets of Warsaw.

Diplomatic tensions between Poland and Israel

The Middle East summit in Warsaw became a place of several awkward declarations, which led to a second diplomatic crisis between Israel and Poland (following the one in 2018). We hope that this will be overcome, as the very fact that this summit took place in Poland was a mark of the special relationship between the two countries. Below, several key-points of the debate.

1. Andrea Mitchell, a foreign affairs correspondent for the MSNBC television network, while reporting from Warsaw suggested that the World War II-era uprising by Jews in the Warsaw ghetto was staged against “the Polish and Nazi regime.” After international outraged reactions, she wrote “I misspoke… when I discussed the 1943 Warsaw Ghetto Uprising. To be clear, the Polish government was not involved in these horrific acts. I apologize for the unfortunate inaccuracy.”

2. Just after a visit of Benjamin Netanyahu in Polin Museum, Jerusalem Post reported his purported quote: “The Poles cooperated with the Nazis.” Netanyahu corrected this report, saying that what he really said was that “a not insignificant number of Poles had cooperated with the Nazis,” The Jerusalem Post corrected their story and the Prime Minister’s office released a statement reaffirming that “PM Netanyahu spoke of Poles and not the Polish people or the country of Poland.”

3. The newly appointed Israeli Minister of Foreign Affairs Israel Katz commented on, during his first TV interview, the words of the Israeli Prime Minister, and he concluded with a controversial quote by the former Israeli PM Yitzhak Shamir: Poles “sucked antisemitism with their mothers’ milk“. This provoked a number of reactions, also from American authorities.

4. The Visegrad group summit – including Poland, the Czech Republic, Slovakia and Hungary – was due to meet in Jerusalem at the invitation of the Israeli Prime Minister – it would have been the first time that the group would have met outside of Europe.

Polish Prime Minister Mateusz Morawiecki decided not to travel to Israel after the published remarks of Netanyahu, and only send there his Foreign affairs Minister. However, after learning, on Sunday February 16, about Israel Katz’s quoting Yitzhak Shamir, Morawiecki decided to withdraw from the summit entirely. In consequence, Netanyahu met the heads of the three remaining states, but the Visegrad group summit as such was cancelled.

5. “Acting Foreign Minister Israel Katz should apologize to Poland for his remarks”, U.S. Ambassador to Poland Georgette Mosbacher said, commenting on the diplomatic row between two countries. “I just felt that two strong allies like Israel and Poland, of course they are strong allies of the United States, shouldn’t be using that kind of rhetoric. We are too important to each other not to work these things out,” Mosbacher told reporters.

6. The chief historian at the future Poland’s Warsaw Ghetto Museum Daniel Blatman (professor of Modern Jewish history and Holocaust Studies at the Hebrew University of Jerusalem) wrote in Haaretz: the Polish nation did not collaborate with the Nazi Germany in slaughtering Jews during WWII: “Israelis are demanding that Poland acknowledge that the Polish nation colluded with the Nazis in the murder of the Jews. This will never happen because it simply isn’t true“.

Conference in Paris: New Polish School of the Holocaust History

Several Polish and international historians gathered in the prestigious EHESS in Paris, and spoke about the new way of speaking about the history of Polish Jews, which does not avoid to mention difficult moments of hte shared history – organized by joint efforts of many people and institutions, including Judith Lyon-Caen, Jean-Charles Szurek, Dominique Trimbur (FMS) and Annette Wieviorka.
Among the invited speakers were Anna Bikont, Audrey Kichelewski, Jacek Leociak, Jan Grabowski, Joanna Tokarska-Bakir, Andrzej Leder, and many other distinguished scholars.

The keynote lecture was delivered by Jan Tomasz Gross (pictured) at the Collège de France, in his impressive French.

In June 2018, four Mayors of Polish cities – Białystok, Gdańsk, Poznan & Warsaw – signed a petition in the POLIN Museum to their colleagues all over the country requesting that they adopt a “zero tolerance policy” regarding discrimination, xenophobia and antisemitism.

One of them, probably the most well-known, Paweł Adamowicz from Gdansk (born in 1965), was murdered on 14 January 2019. Read more…

The European Association of the Museum of The History of Polish Jews (AEMJP) has been supporting the Polin Museum since 2004.

Help us to support the POLIN Museum.

At the outset, we promised to substantially assist the Museum over a period of at least ten years. Our journey continues. We need you and we need your help. Given the current political turmoil, and with the decreasing stability of political powers, we need you more than ever.