The Jewish Culture Festival in Krakow 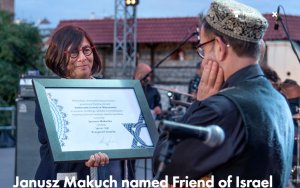 More than 33,000 people attended the 28th Jewish Culture festival in Krakow, which included concerts, lectures and workshops on everything from Yiddish singing to bagels and to Israeli wines.
Thousands of people filled the town square on Saturday night for the seven-hour celebration of “Shalom on Szeroka Street,” which featured a klezmer orchestra, a jazz band, Israeli saxophonist Abatte Barihun and a Havdalah ceremony after sunset.
“This is a Jewish festival organized by non-Jewish guys in the shadow of Auschwitz,” Janusz Makuch said. Many Poles “had thought Jews were only victims, that the only legacy left us by the Germans was death.”
“It really doesn’t matter if it is Poles or Jews,” Makuch added. “We Poles are inheritors of the Jewish culture.”
On Saturday night (July 1), during the spectacular concert „Shalom on Szeroka Street”, in front of an audience of 15,000 people, Janusz Makuch – founder and Director of the Jewish Culture Festival in Krakow received the “Friend of Israel” recognition from Israeli Embassy.
Webpage of the festival: www.jewishfestival.pl/en/
Read more… 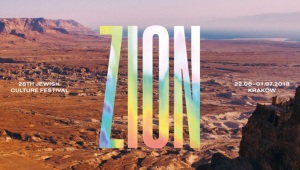 March 1968: Fifty Years After the Last Jewish Exodus from Poland
– a series of three conferences

The conference at the Tel Aviv University, March 18, 2018

The AEMJP, in collaboration with the Institute for the History of Polish Jewry, Stephen Roth Institute for the Study of Anti-Semitism and Racism and the S. Daniel Abraham Center for International and Regional Studies, all from the University of Tel Aviv, organized an exceptional conference. It was dedicated to both the fiftieth anniversary of the March 1968 events and the exhibition at POLIN Museum of the History of Polish Jews in Warsaw.
Read more…
See photos from the event

The conference at Sorbonne University in Paris, April 11, 2018

The second event organized by the AEMJP devoted to the March 1968 exodus took place in Paris, at the Sorbonne University. Organized with the assistance of the Centre of Polish Civilization at Sorbonne, the event included a movie screening (Gdanski Railway Station, 2007, by Maria Zmarz-Koczanowicz and Teresa Torańska) and a discussion between young scholars and Polish Jews who were expelled from Poland in 1968-1969.
Read more…
See photos from the event

The AEMJP organized, with the support of the University of Lorraine, Jewish Cultural Association of Nancy and the Polish Consul in Nancy, a conference on the « Unbearable Absence and the Reaffirmation of the Jewish Life in Poland Today » (L’insupportable absence et la réaffirmation d’une vie juive en Pologne aujourd’hui). The event was organized in a prestigious venue – the main conference room of the Nancy Town Hall, and attracted a wide audience. The AEMJP meeting inaugurated a « May of Europe », annual series of events welcomed by the Town Council of Nancy.
Read more…

The European Association of POLIN – Museum of the History of Polish Jews is proud to be the main patron of the exhibition opened in the POLIN Museum: “Estranged: March ’68 and Its Aftermath”. It explains the causes and the course of the anti-Semitic campaign that culminated in the expulsion of about 13,000 Poles of Jewish descent from Poland at that time.
Not only did this “March 68” exhibition get unanimous praise from the press, but it is also an unexpected success among its audience. Indeed, as it is vehemently attacked by the Polish “patriotic” media, thousands of Poles visit it as a sign of protest against unacceptable anti-Jewish or anti-Israeli attitudes present in the public space.
We warmly invite you to visit this exhibition. It is aesthetically unique as it includes a metaphorical installation reflecting upon the 1960’s atmosphere of Warsaw’s Gdański Railway Station. The departure hall of the railway station is a space for saying goodbye to Poland, where visitors hear oral history interviews. Separate sections will describe the life of refugees after leaving Poland.
This exhibition has been the biggest audience success in the history of the POLIN Museum, and it has attracted a record number of over 63,000 visitors to June 2018. The Museum anticipates as many as 100,000 visitors by the time the exhibition closes in September. 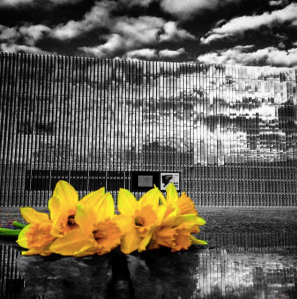 POLIN Museum initiated, once again, the Daffodil Campaign, distributing yellow Daffodils in Warsaw and elsewhere in Poland (April 19), as a reminder of the yellow star of Jews who died, among others, in the Warsaw Ghetto uprising. A record 2,000 volunteers were handing out the paper daffodils, which have become a moving symbol of Christian Poles expressing their sorrow at the loss of a Jewish community that was Europe’s largest before the Holocaust.
The timing coincidence was genuinely unusual. This year, Yom Hazikzron (Memorial Day for the Fallen Soldiers of Israel and Victims of Terrorism) took place the day before the Warsaw Ghetto Uprising anniversary (75th).

Special Prize for the Head of the POLIN Museum

The head of the POLIN Museum Dariusz Stola was designated as the Person of 2017 Year in the area of Culture by the readers of the most read journal of opinion in Poland, Gazeta Wyborcza. The decision was motivated, according to the journal, by exhibitions and other actions of the Polin Museum concering the Jewish and Polish history, shown in a way that is unusual, complex, interesting and brave, and that does not avoid difficult subjects.

During the conference opening the exhibition “Estranged: March ’68 and Its Aftermath”, Prof. Michal Bilewicz, social psychologist from the University of Warsaw and expert on xenophobia and anti-Semitism, gave a brilliant talk on possible explanations of the measurable increase in anti-Semitic attitudes.
This presentation made him the target of a part of Polish right wing media, who accused him of “anti-polonism”. AEMJP resolutely stands by the wonderful team of the POLIN Museum – and its head, Dariusz Stola – in their continuous defence of freedom of speech and of research. The quest for truth is shared both by the heritage-oriented institutions and by science, and without it, our civilisation would not be worth fighting for.
Click here to watch the conference (in Polish)
Moreover, two right-wing journalists, R. A. Ziemkiewicz and M. Ogorek, announced that they will sue Dariusz Stola. The “Estranged: March ’68 and Its Aftermath” exhibition indeed ends with examples of contemporary anti-Semitic public discourse, and several tweets of both journalists are quoted. Dariusz Stola supports the two curators of the exhibition in their decision to make these tweets a part of the display.
Read more in Times of Israel…

On January 26, 2018, a surprising law was voted on by the Polish parliament, denying all attribution of responsibility for the crimes of the Third Reich to the “Polish People / Nation”. This law provoked massive reaction from all over the world, and made the diplomatic relations between Israel and Poland very tense. Anna Zielinska, the Executive Director of the European Association of Polin – Museum of the History of Polish Jews (AEMJP), published an article in the French Le Monde in reaction to this harmful state of affairs.
“Poland: Reviving demons from the past”, Anna Zielinska, Le Monde, February 22, 2018:

How did a seemingly liberticidal law, interpreted as prohibiting any suggestion of Polish involvement in the Holocaust, get passed by the Polish National Assembly on the eve of the commemoration of the 73rd anniversary of the liberation of the Auschwitz death camp? This absurd situation deserves some clarification concerning Poland, which, like the US, is a country torn between two conceptions of patriotism and of its own history. […]

Click here to read complete French and English versions of the article
After several months of difficult discussions, Polish Prime Minister, Morawiecki and his Israeli counterpart, Netanyahu, co-signed a statement regarding Polish-Jewish relationships. On June 27, 2018, The government declared its will to cancel the penal part of the existing law, as it « may divert attention from its initial goal » (i.e. the protection of the « good name of Poland »). As stated, this means that no-one will be sued for suggesting the participation of Poles in the crime of Holocaust. The amendment was adopted on the very same day, in an unusual emergency session, by the governing majority. Both the joint statement and and new version of the law remain controversial.

In Warsaw, “Solidarity in Truth” demonstration 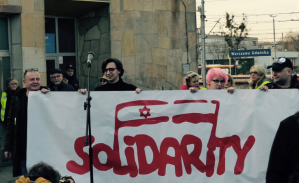 Hundreds of anonymous Poles, as well as well known actors (Wojciech Pszoniak, Andrzej Seweryn, Maja Komorowska, Jerzy Radziwillowicz) and politicians took part in an extraordinary commemoration of the 50th anniversary of forced departures of Polish Jews that took place in the Warszawa Gdanska railway station in 1968.

The event was an expression of regret of this unbearable absence, but also a statement made against the recent law passed by the Polish Parliament and signed by the President Andrzej Duda. The picture illustrates the Warsaw demonstration (March 11, 2018)

“Around 500 Polish citizens marched in support of Israel to honor the 70th anniversary of the Jewish state in the city of Wroclaw in Western Poland (Breslau in German), on May 7, 2018.
Organized by the Association for Cultural and Social Jewish Life in Poland (TSKZ), the march featured the Israeli Ambassador to Poland Anna Azari who spoke about how Israel was able to grow from around 600,000 citizens to nearly nine million people and to become a world leader in innovation and technology.
Those marching held posters with a map of Poland and the caption “My home is your home” and “Israel, we stand with you.” Wroclaw Mayor Rafał Dutkiewicz said that the march is not only about supporting Israel but also about standing up to modern antisemitism in Poland.”
Read more in Jerusalem Post

Until recently, this place was an almost unknown, although it is the oldest and the largest Jewish cemetery in Warsaw in terms of burials (320,000 people). It was founded in 1780 by Szmul Jakubowicz Zbytkower. In the 1980s, the Nissenbaum Family Foundation took over the care of the destroyed and forgotten cemetery. In 2012, it was handed over to the Jewish Community in Warsaw.
The guests were greeted by Anna Chipczyńska, the Chairwoman of the Board of the Jewish Community in Warsaw. Speeches were given by Gideon Nissenbaum, President of the Nissenbaum Foundation, Jakub Beczek, representative of the Chancellery of the President of the Republic of Poland, Hadasa Nissan – Cultural Attaché of the Israeli Embassy, and the Chief Rabbi of Poland Michael Schudrich. Prayer El Male Rachamim – God full of mercy – commemorating people buried in this cemetery was pronounced by Rabbi Oriel Zaretsky.
Read more: warszawa.jewish.org

The idea of the Lost Shtetl Museum in Lithuania has been launched. On May 4 2018, politicians, dignitaries, and members of the Jewish community attended, a ceremony marking the beginning of the construction of a new museum dedicated to the commemoration of the country’s now extinct Jewish shtetl communities. The museum will be designed by the Finnish company “Lahdelma and Mahlamaki Architects,” who also designed the POLIN Museum of the History of Polish Jews.
Read more at eurojewcong.org

We mourn the memory passing of Mireille Knoll, an 85-year old Holocaust survivor, murdered in her Paris apartment on 23 March 2018. Her death was one of several anti-Semitic hate crimes that took place in France in recent years, and we send our warmest thoughts and condolences to her family.
One of the most important American philosophers of the last century, Stanley Cavell, died on June 19, 2018. His family comes from Bialystok, Poland, and as many Polish Jews, he contributed to understanding and crystallizing what America is, or could be.
We recall the emotions provoked by the movie “Shoah” by Claude Lanzmann, who died on July 5, 2018. His work gave new elements to the understanding of the ordinary indifference which permits the worst to happen.