Visit of Queen Mathilde of Belgium to the Polin Museum

Queen Mathilde of Belgium under the Synagogue roof with M. Dariusz Stola and Mrs Corinne Evens 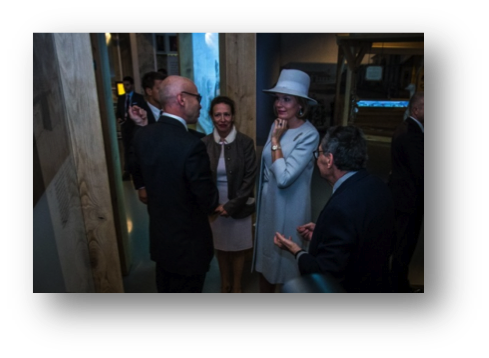 Marian Turski, Chairman of the Museum’s Council and M. Piotr Wiślicki Chairman of the Association of the Jewish Historical Institute of Poland were also part of the visit as the Queen went through the First Encounters Gallery, Paradisius Judeorum, Encounters with Modernity, Jewish Street, Holocaust and Post-war Galleries.Last October, on the occasion of a 3-day official royal visit of the King and Queen of Belgium to Poland, Her Royal Highness Queen Mathilde of Belgium visited the POLIN Museum in Warsaw, on October 14th. She was welcomed by M. Dariusz Stola Director of the Museum and Corinne Evens, President of the AEMJP, who led her to the Monument of the Ghetto Heroes where they stopped for a moment of meditation. The Queen made a tour through the permanent exhibition that shows 1,000 Years of History of Polish Jews, from the Middle Ages to the present.

Artcurial – The Jewish Artists of the School of Paris

On the occasion of the release of the new trilingual edition of book “The Jewish Artists of the School of Paris 1905-1939“, written by Nieszawer & Princ and edited by Somogy, Artcurial organizes a multi-sited cultural exhibition in Vienna, Paris and Brussels, thus putting this artistic movement under the spotlights.

The exhibition in Paris will take place  from Wednesday 16th to Thursday 31st December, from 10am to 6pm at Librairie Artcurial – 7, Rond-Point des Champs-Élysées – 75008 Paris

The AEMJP will be associated with the main signature and cocktail event of the Exhibition in Paris on December 16th.

This year’s Award was presented to Tomasz Pietrasiewicz, founder and director of “Brama Grodzka – Teatr NN” Centre, which has been active in Lublin since 1998.

The inaugural POLIN Award was presented at a gala event celebrating the first anniversary of POLIN Museum’s Core Exhibition. The Award is presented to a person who or an institution which, through their activities, preserves the memory of Polish Jews and contributes towards mutual respect amongst Poles and Jews, and communities in Europe and around the World.

In his praise of the Centre, Marian Turski, Chairman of the Museum Council and POLIN Award Committee, said, “The Centre carries out a range of educational and artistic projects dedicated to the legacy of Lublin Jews. The Brama Grodzka (Grodzka Gate) which, before the War linked Christian and Jewish cultures, has been symbolically restored to its former role thanks to Tomasz Pietrasiewicz’s efforts. It is a place for the permanent preservation of the memory of the city’s common Polish-Jewish past.

The presentation of the Award was followed by a concert featuring Israeli mandolin-player Avi Avital, accompanied by the Polish Radio Chamber Orchestra conducted by Anna Duczmal-Mróz.

Marian Turski decorated by the Commissioner for Human Rights

Marian Turski, the Deputy Chairman of the Association of the Jewish Historical Institute of Poland, has been decorated by the Commissioner for Human Rights Adam Bodnar Ph.D. with the Honorary Medal “For Merit To Human Rights Protection”.

According to the statement of reasons for the decoration, “He devoted his entire creative life to reminding us about the human right to dignity.” He was also honored for his “meetings with young people, and patriotic education focused on the ideals of building a hatred-free world, where human beings treat each other with understanding, compassion and empathy.”

Samuel Pisar has left us

After an exceptional career path as a lawyer and writer, Samuel Pisar, who was one of the youngest and well known survivor of the Shoah, passed away on July 27th in New York, at the age of 86.

He was a distinguished member of our Board of Honor and since the creation of the AEMJP, in 2008, he had offered and unfailing support to Corinne Evens and the Committee for the edification of the Museum of History of Polish Jews which he really cared about. He was of course among us, in October 2012, for the fundraising dinner organized at the Embassy of Poland in Paris.

In November 2011 he had met with Donald Tusk, at that time Prime Minister of Poland, with Simone Veil and Corinne Evens, standing up for the opinion of the Jewish diaspora of Poland.

We miss him very much and will think about him for a very long time.

On December 6th at the Polin Museum, opening of the Family Education Area

This area is one of the two projects supported by the European Association of the Museum of History of Polish Jews in 2015, as part of its initial commitment including the Paradisus Judaeorum Gallery. 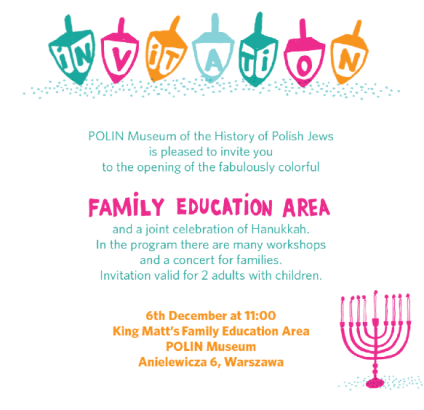 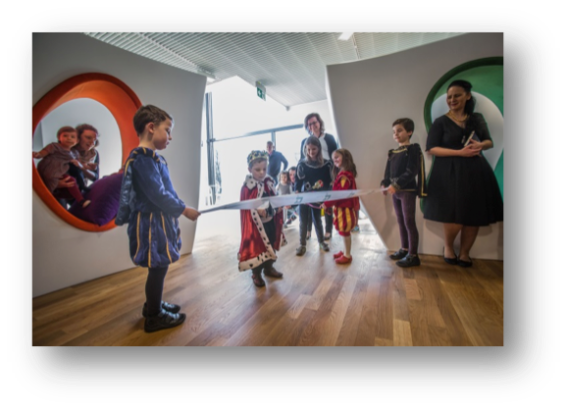 On December 6th POLIN Museum has celebrated the opening of the fabulously colorful and modern Family Education Area. A new space designed for children to learn, play and have fun while discovering the Judeo-Christian culture, tradition and history of Poland.

All activities will be carried out by educators and artists who are experienced and talented and, above all, who love kids!

The POLIN Museum plans to offer a rich program of artistic, culinary and musical workshops, theatrical plays, film screening and small concerts. Children will be encouraged to develop cooperation, leadership and communication skills. They will be learning to present their opinions and debate in a spirit of democracy.

Lately at the POLIN Museum

The “No Such Thing as an Innocent Eye” project (2006–2008) includes more than 300 photos depicting buildings in the Poland of today which once served as synagogues, Beit Hamidrash and prayer houses. “Since 1945, these buildings have no longer served as places of religious practice, and are used as libraries, archives, museums (at best) or garages, factories, warehouses or fire stations. Even though the communities in those cities, towns and villages can obviously see them, they have never given them any special attention,” the author observes. 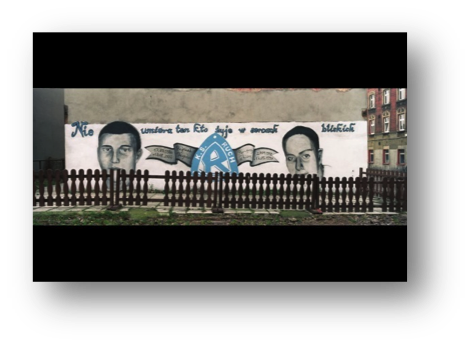 In February 2011 the Association had organized in Paris and exhibition of Wojciech Wilczyk’s pictures and sold the author’s book “No Such Thing as an Innocent Eye”, prefaced by Corinne Evens. That book can still be purchased for 25€ by contacting the Association at contact@aemjp.eu

The exhibition at the Museum of the History of Polish Jews comprises two photographic series by Wojciech Wilczyk, the winner of this year’s Grand Press Photo Award.

In February 2011, the AEMJP had organized and exhibition of Wojciech Wilczyk’s book

The “Holy War” project (2009-2014) was created in Kraków, Łódź, and the Upper Silesia region. The artists photographed pieces of graffiti created by people who consider themselves football fans, and in many cases Polish patriots as well. In nearly 400 photographs, Wilczyk shows murals made by football supporters involved in little wars, and armed with abusive language and images using racists (and frequently anti-Semitic) slogans and symbols.

More than 2.5 million participants in the POLIN Museum’s Jewish Cultural Heritage program supported by Norway and EEA Grants during the last two years.

The Jewish Cultural Heritage program’s goal is to promote tolerance and help prepare young people for life in today’s multicultural society. It is dedicated to school children and youth, teachers and educators, as well as people and communities across Poland with limited access to culture. 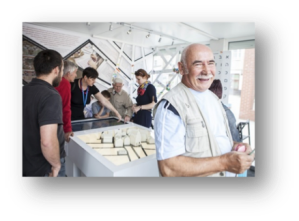 It is carried out in cooperation with the following Norwegian institutions: HL-Senteret, the European Wergeland Center, Falstad Center, the Jewish museums of Oslo and Trondheim.

The following figures show the projects with the greatest impact:

The Jewish Film Festival in Warsaw

The 13th Warsaw Jewish Film Festival was held from November 2 to 8, 2015. Screenings took place at the POLIN Museum of the History of Polish Jews and JCC Warsaw. This year’s festival was dedicated to Mike Nichols.

This year, the Warsaw Jewish Film Festival was held on both sides of the Vistula river, in two Warsaw districts–Praga and Muranów! The official cinema of the festival is Kino Praha, however, the screenings also took place at the Museum of the History of Polish Jews, the main partner of the 11th edition of the festival. During five days of screenings in Kino Praha and four days of screenings in MHPJ, thirty-five feature films and documentaries were presented, which won critical acclaim at various international festivals.

The main awards (Camera of David) were as follows:

Legislatives Elections : Absolute Majority for the Conservative party, no MP for the left wing.

Catholic conservative and euro sceptics of the Law and Justice (PiS) party have won an absolute majority at the Polish Lower Chamber, according to the final results, published on October 27th after the legislative elections of the previous Sunday.

The party of Jaroslaw Kaczynski and Beata Szydlo, now Prime Minister, won 37,6% of the votes, representing 235 of the 460 seats of the new Assembly. Since the end of communism, in 1989, no political party had achieved such al success during an election.

The civic platform (PO, liberal right wing), in power for the last 8 years, only got 24,1% of the votes, very far from the results achieved four years ago (39%) and is now only granted 138 seats.

As for the left wing, they have been completely removed for the new Parliament. The splitting into two sub-parties – unified left wing (7.55%) and Razem (3.62%) – didn’t allow them to reach the eligibility threshold of 8% required for coalitions.

Should you wish to have the list of all the members of the Polish government, please follow the link http://www.ambafrance-pl.org/Composition-du-gouvernement

The Court of Krakow refuses the extradition of R. Polanski

On October 30th, the court of Krakow denied the United States the extradition of moviemaker Roman Polanski.

« The court pronounced against the extradition to the United States of the Polish-French citizen Roman Polanski », declared to the press Judge Dariusz Mazur. However, the Public Prosecutor’s office representing the American request can go to the court of appeal.

Eight years of continuous growth, a decreasing unemployment (to 8.6%), 82 billion euros of European funds to spend until 2020, Poland is a significant economic success in Europe. At the height of the crisis, Donald Tusk, then Prime Minister, was showing an EU map of 2009 where all the countries were in red (in recession), save one big green spot of growth: Poland. The growth is still there (3.6 % forecast in 2015, after a 3.5 % growth in 2014).

“The steady growth of these last ten years has really impacted the population’s standard of leaving, highlights Witold Orlowski, member of the National Council for the development, to President Andrzej Duda. But if people tend to complain, it is because as their standard of living has increased so have their yearnings. Citizens do not compare their standard of living to what they had ten years ago but to what their neighbors have. And what they see is that they still earn tree times less than Western Europeans, and that Poland is still twenty to thirty years from catching up with the development delay. They thus feel that things are going bad.” GDP per inhabitant represents only 68 % of the European average (behind Slovakia or Czech Republic). The average revenue level of a household is 899€ per month.

The economic benefits have not always been well divided up. The Polish of the east of the country, voting for the conservative party, PiS, are feeling neglected. The unemployment increase has been slowed down by a generalization of poverty, with the establishment of “trash contracts” underpaid and with no guarantee.

To be seen in Paris

Temporary exhibition at the Polish Library of Paris

Tadeusz Rząca (1868-1928), son of a photographer from Krakow, married to a French woman goes on a study trip in France where he mastered the techniques of color images (autochromes) with the Lumière Brothers. He is the first Polish to use this technique. In 1910, he published the album “Charming Poland, the Region of Krakow”. The photographs in black and white are part of the collections of the Photography Gallery of Gdańsk; As for the autochromes, they are coming from the History of Photography Museum in Krakow.